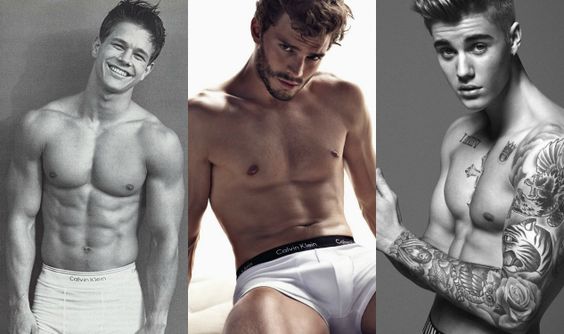 Jaw-dropping happens with us only when we see Cristiano Ronaldo in those sexy pair of underwear or it happens with you as well? And it’s not just when we see Ronaldo in a sleek and fitted pair of men’s briefs and boxer briefs, it’s impossible to control our heartbeat when we see male celebrities like Justin Bieber, David Beckham, and others in sexy men’s underwear.

If you haven’t, this Mens Underwear blog is a must-read blog for you. So now, grab a glass of beer and enjoy the blog.

Cristiano Ronaldo dos Santos Aveiro GOIH ComM, who doesn’t know this sexy male Portuguese professional footballer. Besides playing soccer, he is also a celebrity model for one of the biggest and known underwear brand, Emporio Armani. In 2009, he modeled for Emporio Amani underwear and further partnered with a Danish company to come up with his line of men’s underwear called “CR7”.

“I’ve been wearing Calvin Klein underwear for years in hopes of modeling for the brand one day”, says Justin Bieber. The singer has been waiting for that day when Calvin Klein chose him as his model and guess what, the brand did that.

Justin once posted “It’s always been a dream. Last Spring, he posted a picture on Instagram in his underwear, with the #mycalvins tag” on his Instagram account. As a result, brand saw that and loved the reaction.

Recently Tommy Hilfiger told TMZ “We all wish that we looked like David Beckham at the end of the day”. It is true.

This is not the first time when David Beckham, 39-year old hottie has stolen our heart with his killer looks, chiseled jawline, and toned body. Before modeling for the H&M campaign, he even modeled for the Emporio Armani collection.

The seductive pictures of David Beckham, posing for a variety of male underwear and loungewear, flaunting his flawless abs, tatted biceps, and chiseled jaw are enough to turn our bad day into a good day. In one of the images, Becks has posed wearing a pair of itty-bitty white briefs for men while gazing to the side and flexing his impressive oblique muscles. Do we even need to mention how delicious he was looking?

Earlier Jonas brothers were stealing our hearts with their amazing songs and now, with their toned bodies, they are making us speechless especially Nick Jonas.

With his Calvin Klein ad, Nick Jonas certainly made the appropriate “I’m an adult now” statement which is kind of similar to Mark Wahlberg’s ’90s campaign.

Mark Robert Michael Wahlberg is the former name of Marky Mark and is an American actor, producer, and former rapper. Further, Wahlberg signed on as a model for Calvin Klein underwear, after the huge success of “Good Vibrations” by Marky Mark and the Funky Bunch. The photos of the ads were shot by Herb Ritts who is a famed photographer. This made Wahlberg a household name.

Beninese-American actor and model, Djimon Gaston Hounsou started his career appearing in music videos. When he was named a Calvin Klein underwear model in 2007, Hounsou already became successful in acting and earned Oscar nods for some of his great works- In America and Blood Diamond.

But if we talk about his solo shots, don’t blame us if your jaw drops down.

So when it’s about staying confident, these male celebrities swear by the male underwear range. Hence, if you are one of those who prefer not to wear male underwear, even if it’s male brief or boxer briefs underwear for men, you need to reconsider.