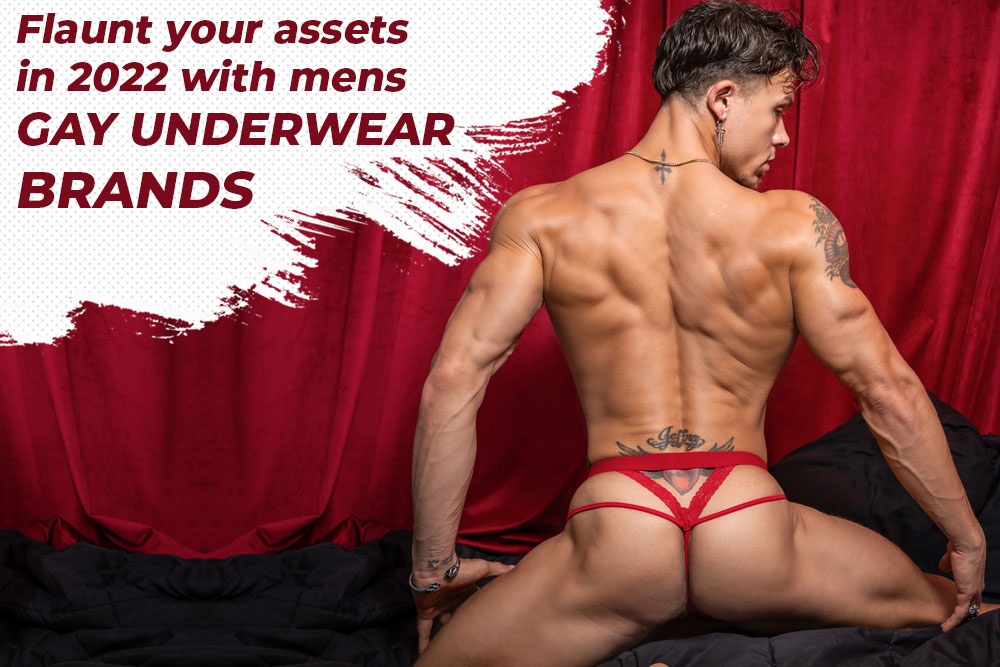 If you are a confident man, whether the brand is selling underwear styles specifically for the LGBTQ community or for straight men, the doors are open for you. However, if you want to flaunt your features, then opting for men’s gay underwear brands are best for you. From colors to the designs, everything is bold and beautiful.

The underwear styles offered by these brands not only cover your manhood but enhance the shape of your male anatomy. With the help of these styles, you can reflect your spirit as well as inner colors and the truest versions of yourself. Moreover, the color palette used by these underwear brands reflects your body empowerment, self-love, and self-confidence as confidence is sexy.

One of our favorite men’s gay underwear brands is Andrew Christian. As a brand, it has made its name on the raciness of its kecks and its LA fanboys. The eye-catching designs are what makes this brand different and in case you want to look different, make sure you carry them with confidence and style.

Speaking about the lingerie styles offered by the brand, one can shop thongs to male jockstrap underwear to sexy brief underwear to men. The styles that you will find in their range come with an anatomically correct front pouch. Hence, there is no question of feeling uncomfortable as it offers enough room for breathability and support.

The brand with microfiber blends, shiny finish, breathable fabrics, any guesses? It’s none other than Garçon Model, a proudly Canadian-based men’s gay underwear brand. Talking about the silhouettes of the styles, they are bold.

So, while these undies aren’t just for good boys, they’re also smart and suggestive, making them a valuable addition to any gay man’s wardrobe. Besides that, Garcon Model is in favor of social justice, refugee, and gay groups. They even regularly donate to the homeless.

Anyone trying to find attractive and economical gay underwear on a budget should play the doors of JOCKMAIL. This mens gay underwear brand is less expensive than other luxury gay underwear manufacturers, yet it’ll still cradle your package while leaving your ass looking beautiful. Furthermore, they provide underwear styles endued with interesting patterns. It even includes both underwears also as sensual jockstraps, all with the JOCKMAIL logo prominently displayed.

Hence, making a statement and flaunting your booty without going broke! yes, it’s possible with JOCKMAIL.

Daniel Alexander has been a well-known and effective men’s underwear company since 2015. The distinctness and freshness of the numerous styles have added to the male population’s underwear trend, despite the fact that the company has only been established for a few years.

Whether you like classic men’s underwear designs such as boxer shorts or boxer briefs for men, or sensual underwear styles such as men’s bikinis, thongs for men, or mens g-string underwear, Daniel Alexander has created each selection with passion and love.

Miami Jock is another interesting mens gay underwear brand that needs your consideration. This Brand offers a wide range of male lingerie but with a twist of exoticness. So all those of you who like to go bold and naughty, Miami Jock is the brand you should consider. Having an excellent and comfortable pair of men’s underwear is necessary to propel your progress forward, thus we’ve put together a list of the top men’s lingerie. There’s no need to tinker with your comfort when you may have this brand and enjoy all of your activities without hindrance.

Well, these are all our favorite men’s gay underwear brands and atleast one style of lingerie must be in your wardrobe. Because you never know, when you really want them. It’s always safe than being sorry.

Any weekend plans? cherish your weekend with this Gay Underwear
Pistol Pete PPI008 Hard Wood Bikini
New Launch: Pistol Pete Jockstrap and Good Devil Thong
Jockstrap VS Lace underwear – who would be the winner this Thanksgiving?

Last night was special, thanks to these naughty men’s g-string

Any weekend plans? cherish your weekend with this Gay Underwear