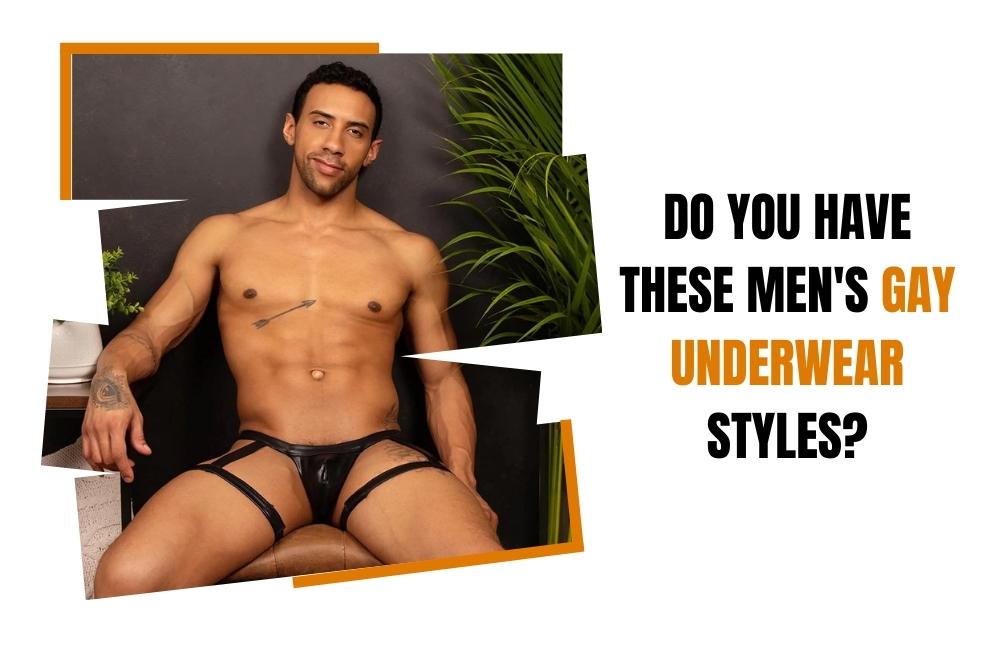 There are several types of men’s gay underwear, Here we have listed few one of the popular men’s underwear for your collection. Have a look!

What is So Special About Men’s Gay Underwear?

Male briefs, boxer briefs, thong underwear, and G-string underwear are all options for men who identify as straight. What about gay males, though? Are designers even aware that they exist?

You must be thinking, am I living in the past?

Well, this is something in the past. In fact, now things are different. Designers are aware. Moreover, there are designers like Andrew Christian who designs men’s gay underwear in particular.

Naturally, the answer is “yes.” Considering that every man has a right to look like Harvey Specter, designers have developed looks that are great for both straight and gay men.

Although every design of men’s underwear is attractive and distinctive in and of itself, these styles have an “exoticness” about them that makes them desirable for owning and admiring. These male underwear designs are the epitome of elegance in simplicity.

Men’s jockstrap underwear is a small, slender, and seductive pair. Well, it’s been made specially. The men’s gay underwear has a waistline, two straps, and a pouch. It’s simple to wear and transport. Jock straps are regarded as “Gay Underwear” among gay men for a variety of reasons, one of which is that they are “Shockingly Comfortable.”

Male jockstraps can never ride up in the front or rear, whereas men’s brief underwear can readily do so. Compared to other types of male underwear, they are far more comfortable. You can walk around, run, and hold your preferred poses (you know what we mean). #NoHinderance

The fact that gay men feel more confident is the second factor in their classification of this type of underwear as “gay underwear.” It may seem strange and unexpected, but it is true that donning attractive underwear, such as jockstraps, boosts confidence. Last but not least, this attractive male underwear serves as a sports bra for men, keeping everything in its proper place, erect, and locked.

Even though this beautiful male underwear looks excellent on all body types, wearing a pair of jockstraps is a must if you are an athletic type. It will significantly enhance your personality.

Fantastic male underwear styles can be found in this category. The men’s g-string, men’s bikini, and men’s thong underwear are just a few examples of the styles available in the sexy underwear collection.

The greatest moment to wear any pair of lingerie from this category is when men feel like pushing their relationships to the next level. Men’s G-string underwear can be used to easily turn on your lover, but you need to make sure it is comfortable for you first because g-string underwear is not for novices. Beginners will need to work harder to adjust to it.

Without a doubt, this men’s underwear line may make your dull existence more interesting. You can change to these styles if you’ve had enough of wearing boxers and briefs.

The men’s see-through assortment includes designs like mesh, lace, and sheer underwear. If they haven’t tried any of them yet, they can just label any of these styles as “men’s gay underwear.” These will flatter your features and are cozy and supportive. We won’t advise males to wear anything other than mesh if they plan to incorporate these looks into their daily lives, though. These fashions are not ideal for everyday comfort because they are constructed of lace and sheer fibers. The best time to wear them is, therefore, on important occasions.

As a result, any type of lingerie from these collections can be chosen by gay men who were looking for seductive underwear that could accentuate their attributes without allowing them to forgo support and convenience.

My Experience Of Men’s G-String Underwear And A Few Tips!

How to Dress For the Gay Pride Celebrations? Check Out This Guide!