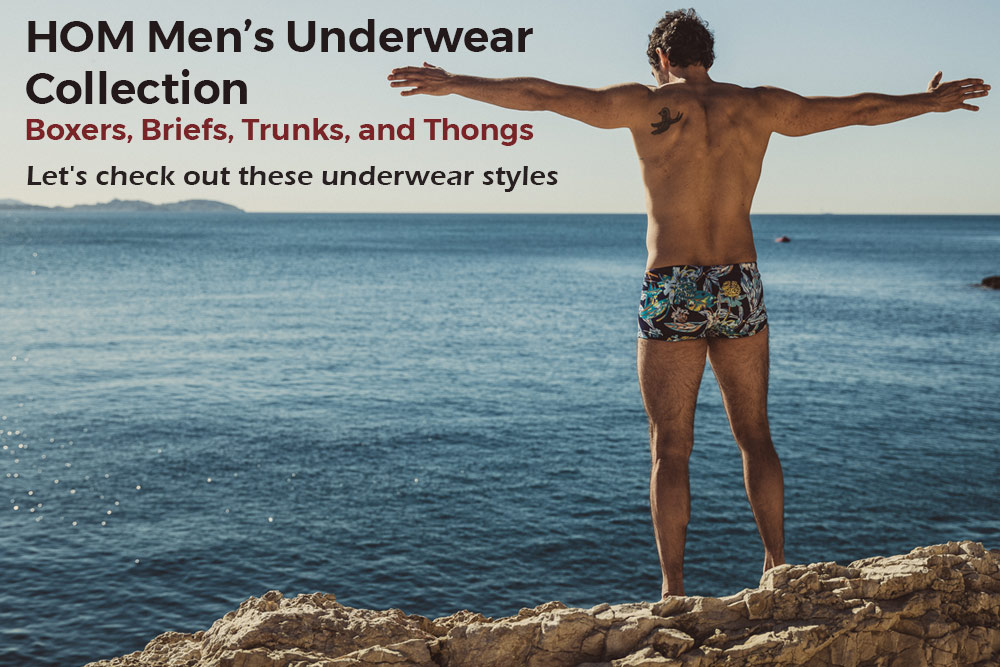 When it comes to men’s underwear, HOM sets the standard.

Having begun life in the south of France in 1968, HOM has been at the forefront of expanding the definition of “comfort” in men’s underwear ever since. Its offerings have expanded to include other categories, such as swimwear and loungewear, but it is the underwear that has made the company famous among men for decades.

HOM is one of the popular brands in the men’s underwear industry. However, the designs and materials define the HOM quality for its shoppers.

Although its designs bring comfort and style together, they also cover a wide range of underwear styles, such as men’s boxer briefs, men’s sensual thongs, and men’s briefs.

The south of France is the most fashionable and appropriate place to introduce HOM. Since its founding in 1968, HOM has produced smoldering lines of men’s underwear that emanate the same heat, elegance, style, and class that one finds on the French Riviera.

HOM has been a consistent brand innovator, whether it’s the introduction of Supple Cup underwear in 1968 or the elastic-free waistbands in 1976.

HOM has always been one of the top men’s underwear brands. However, the HOM HO1 was the first breakdown they received in 1997.

To say that the HOM HO1s has become an iconic staple of men’s underwear would be an understatement. They were the first underwear to feature a horizontal opening. The horizontal opening of the HO1 collection provides not only effortless access when needed but also superior support and comfort where it matters most. The opening is equally convenient for right- and left-handed users, marking a significant improvement in universal accessibility.

HOM’s underwear collection has a great markup in the men’s underwear world. Worked hard to build luxurious underwear based on its principles for providing comfort, elegance, and functionality.

The lightweight and breathable fabric used in the construction offers a high level of support in addition to exceptional fit and feel. It comes in a wide variety of colors and unique patterns that should appeal to a wide range of customers.

Without further ado, here is the breakdown:

There is a wide variety of collections for HOM boxer briefs at Pants&Socks. It is, after all, the best place for HOM-oisseurs to aspire to HO1 Boxer Briefs. The HO1 is made of modal cotton, which sticks to the skin and fits snugly to the body.

This is how the HOM’s features its quality men’s underwear. It also includes an elastic waistband to give the bums and package a sexy shape.

The fibers used to make modal cotton. These are pretreated to increase strength and durability before being spun into yarn. Thus, while the fabric retains the natural softness, breathability and moisture-wicking properties of cotton, it is much more durable. The HO1 boxer briefs are great for everyday use because they are fashionable, comfy, and affordable (though they aren’t exactly cheap, you get what you pay for with HOM).

The HO1 boxer briefs are also available in a longer cut, which is great for those who want a more traditional style and feel and who want to minimize the amount of friction that develops when sitting or standing.

HOM’s men’s trunks are designed with a thick polyamide and elastane waistband to hold the package and bums from behind. So that, it can be highlighted under the pants. You can check out the collection in a wide range of multi designs, colors, and prints that might appeal to you.

The collection is ideal for men who prefer a shorter fit on their legs that is also comfortable, breathable, and sung fit.

The Plumes line uses the same ultra-lightweight combination of polyamide and elastane, but the garments are sewn together slightly differently. You can sing the Plumes to your heart’s content, because they are designed to disappear under your underwear.

The HO1 Mini Briefs are the best underwear HOM has to offer. These briefs are made from incredibly soft modal cotton and have the same ingenious horizontal opening as their boxer brief siblings. Modal is great for men’s underwear since it resists shrinking and friction and has excellent absorbing properties without the drawbacks of synthetic fabrics.

It also provides superior support to the functional part as well as air flow to keep it cool and dry.

Pants&Socks carries two different HOM thongs. Both of these are excellent options for the man who values comfort and support without sacrificing mobility.

Polyamide and elastane are combined in the construction of the HOM Plumes g-string to create a seamless, airy piece.

It can fit in your best men’s underwear collection. After you wear the light-weight, sexy appeal and provide the ultimate comfort to the underneath area.

The men’s thong is the jack of all trades in men’s underwear styles. As it provides coverage, superior support, and a stylish appearance to attract your partner.

Put some seductive French flair in your underwear drawer with HOM.