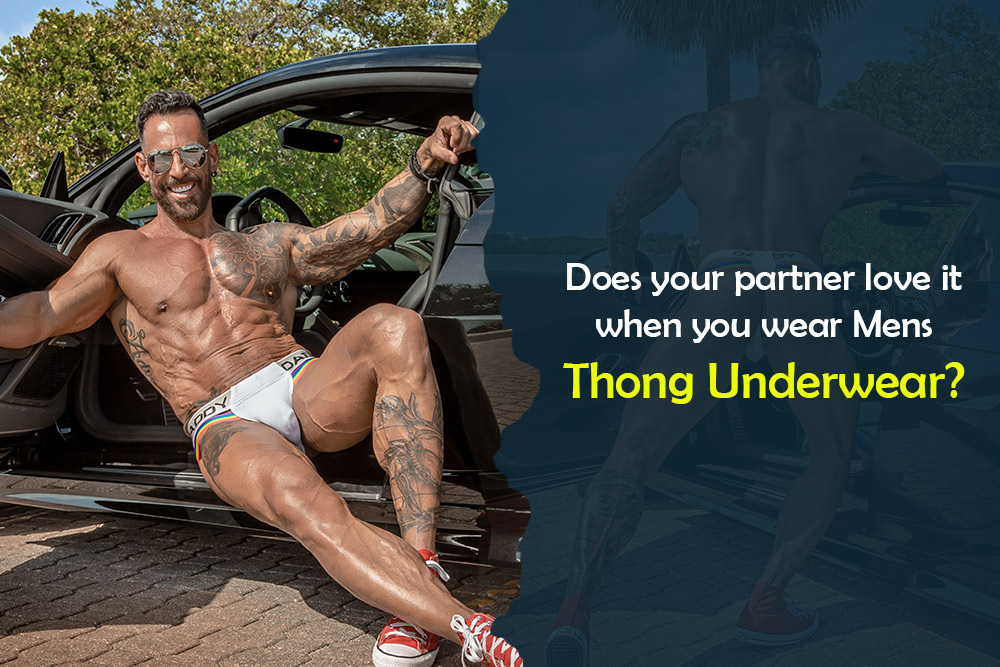 Seeing men in today’s time wearing any mens underwear style is pretty common. Whether you’re talking about mens bikinis or mens thong underwear. However, the question is – does your partner like it when you sport men’s thongs? Do they approve of it?

Well, that is something depending on the personal choice. There are men and women who love their men in thongs. However, not all of them do! I was researching about the topic and found this thread on Quora (https://www.quora.com/Do-women-like-seeing-men-wearing-thong-underwear-or-swimsuits) where you will find men and women coming out with their opinions. On the other hand, this article from Pulse (https://www.pulse.ng/lifestyle/relationships-weddings/ladies-what-do-you-think-of-men-who-wear-thongs/pk6302s) states otherwise. Well, the thoughts can be too contradictory when you start going through them.

Pragmatically talking, it is not only men who get ahead to investing money on their men’s underwear; their partners are just as enthusiastic. They purchase men’s thong underwear and other mens sexy underwear types in order to spice up their love lives. The sheer materials and inventive pouch choices pushed people to purchase hot underwear for guys as well. If teasing and enticing is the goal, men’s sheer underwear is worth investing on.

We, here will see the aspects that partners understand or should understand about male thongs.

Thongs for men are an excellent source of turn on

Consider the first time you saw her in her revealing lace panties and felt something tickle your body. There’s also no difference here! I was talking to my gal over the weekend, and she revealed that these buddies (girls) actually discuss the magical underwear. When males make their point with something so seductive, it functions as a turn-on. It was then that I tried men’s thong underwear for the first time and never looks down.

Male thongs are one of the sexiest fashion trends

While some of you may disagree with the idea that thongs are the most attractive, they are. Male thongs are exposing, comfy, useful, and attractive, much like female thongs. Mens thong underwear pleases the eyes while also pampering the naughty bits.

Mens thongs are ideal for both everyday and special occasions

Another feature that appeals to women is the fact that their men will be comfy and supported throughout the day and every day with the appropriate style. On the other side, they wouldn’t have to change or get in the mood if they wanted to get cuddly anytime they wanted. They’re fun, mischievous, and designed to be enjoyed.

Mens thong underwear is the tiny element that plays a huge part in bringing the most out of guys when the goal is to unwind and have a sexy time behind closed doors. The design is visually pleasing while also providing enough or no support. You may select between mens enhancing underwear and sheer underwear for men according to your mood and wish.

If you investigated writings about partners checking out men’s underwear a long time ago, you’d learn that ladies thought guys wearing thong underwear for men were disgusting. hey didn’t consider it as an element of the men’s apparel sector at first. Eventually, they finally understood that men have the right to pick what sort of underwear they want to wear and what they don’t. Partners may buy men’s thongs because they’re becoming more popular among guys in general since many men find them to be quite comfortable and supportive.

So, here we are! Whether or not your partner approves of your mens thong underwear, you should continue if you feel great. Moreover, explain these aspects for them to have a better understanding. What do you think of thongs for men? Do let us know in the comments below.

Pitfalls in Mens Jockstraps that you should not ignore?

Did you know all this about Men’s Thong Underwear?

Planning for Netflix and Chill this Valentine’s? Checkout these pairs of men’s G-string underwear