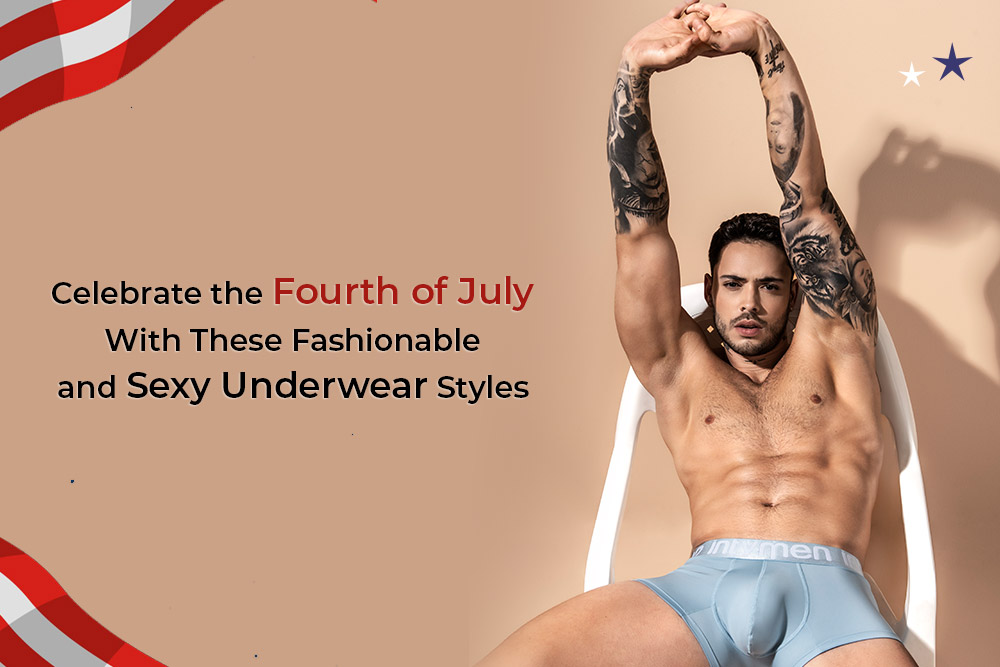 Sexy underwear styles are waiting for you to have a look over different brands such as; Agacio, CoverMale, Good Devil, and many more.

The Fourth of July was a time for family backyard barbecues, pool parties, neighborhood parades, and firework displays when we were kids. The wardrobe has changed, even though most of this hasn’t. You may celebrate the hotter side of patriotism with the help of the ILoveMyUndies 4th of July selection of mens underwear and lingerie.

The American Flag is perhaps the most patriotic symbol there is. Our country is of thee, lovely land of liberty, as our founding fathers said, and these styles are exactly what they meant.

In this blog, let us take a look at sexy underwear styles options that can help you look fashionable. Moreover, stay in the patriotic spirit this America’s Independence Day.

Cover Male has long been in the game of men’s underwear. In fact, it has been one of the most trustworthy names for men when it comes to underneath fashion.

With a collection that is a blend of fashion and function, Cover Male has something for every man. Moreover, it has a line of flag underwear that is chic and sexy. For instance, the USA Flag print underwear is a great way of honoring Independence Day.

With a blend of 83% polyester and 17% spandex, this men’s thong underwear is a must. In fact, it is hot, comfortable, fashionable, and irresistible for sure.

With a low-rise fit, the broad waistband doesn’t roll over. The flag print on the pouch and the minimal strip in the back look appealing for sure.

Briefs for men are supposed to be the most comfortable underwear style. Furthermore, if you add the USA flag print, the appeal goes over the top.

This Cocksox brief is a stunning way to celebrate your Fourth of July with your partner. In fact, the brand also has a flag print slingshot that is skimpier and hotter for sure. Moreover, it promises more skin show than this one.

This pair of men’s briefs are appropriate for a laid-back evening and sexual activity. They can be used in place of ordinary underpants. mentioning the textiles Men’s brief underwear is made by Cocksox designers using Supplex and Lycra fabrics, which give it its remarkable flexibility and stretchability.

They go well with your training attire since they allow for a good deal of leg movement.

This look has been presented by Cocksox in hues including various color options. Finding your size in this design is simple because they come in a variety of sizes.

Thanks to its enduring patriotic design, the CandyMan Patriotic Thong will have you singing “Stars and Stripes Forever.” What better way to display your sense of national spirit than to decorate up your best possessions?

This mens thong looks more like men’s g-string underwear because of the back string and minimal coverage. In fact, it is the pouch that cradles and holds the manhood in an ergonomic state.

Well, you get to show off so much skin wearing this sexy underwear for sure.

Well, you cannot call this one a flag print option for the occasion. However, it doesn’t disqualify either. With a low-rise fit, it is the shimmery texture and the stunning fit that steals the show.

In order to produce a comfortable and distinctive wearing experience, the manhood will gradually fall into the ergonomically suitable pouch.

These are the sexy underwear styles which you can refer for yourself. Now, what are your plans for the Fourth of July this year? Which of these mens underwear would you like to have? Do let us know in the comments below.

Which Men’s Underwear Styles Are Apt for Workout in Summers?