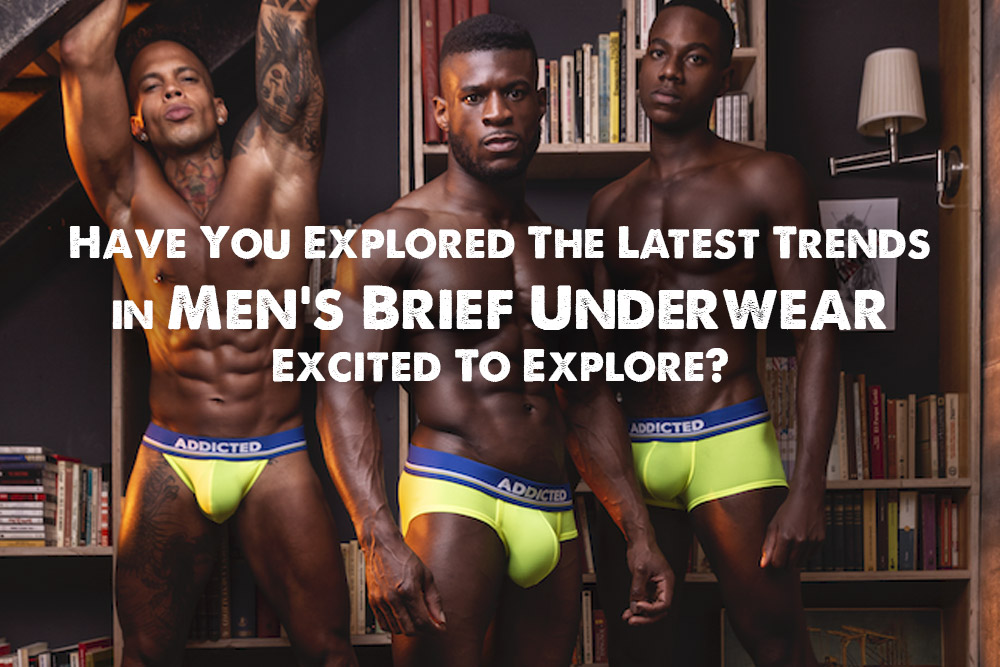 Men’s brief underwear is now the ideal men’s underwear for any beginner who want to explore different variants. Go through the latest trends of men’s briefs.

Are You in The latest Trends in Men’s Brief Underwear?

Men’s underwear fashion is a topic that was formerly taboo and only discussed behind closed doors. Men used loincloths so as to conceal their privates and shield their lower garments from the elements. Later, men’s underwear began to develop its own style. The men’s underwear industry deserves praise for its efforts to promote the innovation of men’s underwear, which has evolved from its original function as genital protection apparel to its current status as an undergarment fashion statement.

In the very beginning, men’s boxers and men’s trunks were popular across the globe and were the favorites of everyone. However, the men’s underwear industry has started inventing different styles for different purposes and occasions people celebrate. According to a recent survey of every underwear style, men’s brief underwear and its various variants that the men’s underwear industry has launched around the world are popular.

People enjoy wearing men’s bikini briefs because they are aware of their benefits and drawbacks. However, it has found a place in men’s hearts and helps a lot to make things right with your partner. The term bikini has been added to the brief and can show you its structure with high cuts and fabric.

At the beach, the pool, or a social event, it is often regarded as the perfect accessory. Men’s bikini briefs provide a lot of exposure and the comfort of a pouch, while men’s brief underwear provides you with a more subdued appearance.

Men’s boxer briefs are designed to provide comfort and support to the functional part. Although, the heading denotes the clue that the underwear is a combination of men’s briefs and men’s boxers. Skin-tight and comfortable clothing makes your genetical stable and provides ample space for ventilation to keep it cool and dry all the time. Due to that, you guys can perform physical activities and sports activities as well.

You can feel supported in your lower body as you move thanks to the soft fabric that provides ample coverage for your undergarments. Boxer brief underwear for men has an elastic band to keep the briefs together and provide the necessary grip.

Men’s brief underwear with high-rise cuts and shapes. As the underwear provides a lot of visibility to the thighs and abdomen. There is a very small difference between men’s bikini briefs and men’s high-cut briefs that might confuse you while you are purchasing one of them

Men’s high-cut briefs, in contrast to certain men’s bikini briefs, feature cloth at the sides. High-cut briefs for men are versatile, and those made from cotton are the softest and most comfortable options.

People who feel shy about revealing their body parts and thigh cuts to others while wearing men’s briefs generally prefer to wear low-cut briefs. Low-cut briefs are one of the popular variants of men’s brief underwear that provides complete coverage for the cheeks and ample space for the manhood to make it breathable. Stretchable cotton is the most common fabric preferred by the male population.

It gives its owner refined air and helps him maintain peak penile condition. When it comes to men’s underwear, low-cut briefs are the way to go to avoid the embarrassment of a bare chest.

When you wear any of the several styles of men’s brief underwear, you won’t have to worry about any embarrassing flashes of skin. Many women share the opinion of the male population that men’s bikini briefs are the sexiest swimwear option.

Men’s Bikini Briefs: Everything You Should Know

Have You Tried Men’s Jockstrap Underwear For Parties and Work?